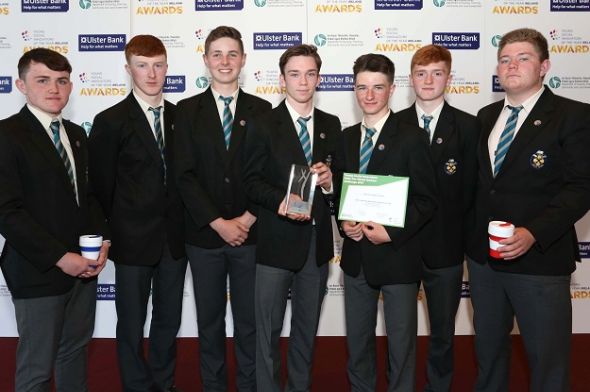 The world’s coffee culture is having a detrimental impact on the environment with one million paper cups a minute being discarded in landfill sites each year. The idea for Ditch Your Carbon Cup Print was sparked when students noticed huge quantities of paper coffee cups in their school’s bins. The team’s aim was to reduce carbon emissions locally and nationally by promoting the use of reusable coffee cups.

The team organised the first ever ‘Ditch Your Carbon Cup Print’ week in the town of Charleville, where consumers were encouraged to use their own cups instead of paper ones when buying take-away drinks.

In order to encourage people to use a reusable cup, local businesses  gave a discount to those who supplied their own cup. The team created and distributed informational material and the campaign received extensive local media coverage in The Corkman and The Limerick Leader.

The young people contacted politicians for advice on how to expand their project including Minister Micheál Martin, and the Minister for the Environment, Denis Naughten. Their research led them to contacts in the US who have designed a reusable, collapsible cup which the team feel may increase convenience for consumers and therefore the potential impact of their  project.

The team are eager to present their model to the Department of the Environment and the Environmental Protection Agency to instigate a national rollout of this campaign.

We began to think about the individual’s carbon footprint associated with this daily habit. We decided to research the cost to the environment from the use of and disposal of the paper cup.