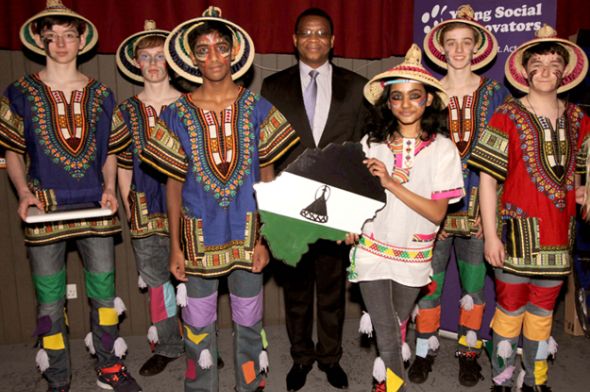 The main aim of this project is to inspire greater global citizenship and create global citizens who will pursue humanitarian mapping. Humanitarian mapping brings strategic information and planning to developing countries and is a key tool in the combat against poverty, climate change and land management. The team's school is twinned with Hlalele High School, situated 20 kilometres outside Maseru, the capital of Lesotho in Southern Africa. The team has created an online map for Lesotho, #MapLesotho and hopes to bring humanitarian mapping to as many young people as possible and to create mapping communities that will support developing countries globally.

The team chose this project because in developing countries governments do not have sufficient funding or resources to map their entire country online, and the map of Lesotho was largely a blank canvas. Without proper land boundaries it is easy for land corruption to occur. Without proper land surveillance people can damage and tear down natural preserves such as rainforests, which as global citizens we all have a responsibility to maintain and protect. The Global Citizen – Mapping the Future team is deeply committed to the concept of Global Citizenship.

The team have worked with Dave Corely, the founder of openstreetmap, Fingal County Council planners, students and teachers in their school, a number of secondary schools both in Ireland and abroad, and their twin school in Lesotho- Hlalele High School. They also attended the YSI Den where they received mentoring and funding from the Vodafone Foundation to organise a ‘Mapathon’. The Mapathon took place in March 2015, and provided an opportunity to teach people from multiple schools how to map, leading to the completion of #MapLesotho as a template.

The team has been very active in their own school community and over 300 students are now trained in mapping. 200 students have travelled to Lesotho with parents, teachers and community members engaging in a wide variety of activities support communities and agencies. In February 2016 the team has worked with Tourism Lesotho on how tagging and mapping can help improve Lesotho as a tourist destination. The team has also worked with the bureau of statistics Lesotho on how to use our maps for their forth coming census.

In 2016 Mapillary was introduced to the project as an enhancement process, changing the maps from a 2D to 3D platform, making the maps easier to understand. A planner for the north of Lesotho observed when working with farmers “they were slow to understand their land when it was in one dimension, when the land was presented to them in 3 dimension they began to appreciate their landscape better”.

In 2015, as a result of the Mapathon, a basemap of Lesotho was created, which could be built upon by locals. The project team's brand #MapLesotho can easily be transferred to #MapSouthSudan, #MapKenya etc. Once the brand is created within a school community it is simply a matter of training and creating a community of humanitarian mappers committed to the cause.

The team hope to promote this brand to more schools and that the work they started will continue to spread, leading to the creation of more detailed maps for many regions. In February the project will see 40 students travel to Lesotho in 2017, all trained in mapping to use as they travel.

2015 Making Our World One World

2016 Young Social Innovators of the Year

2017 Step Up
Challenge supported by