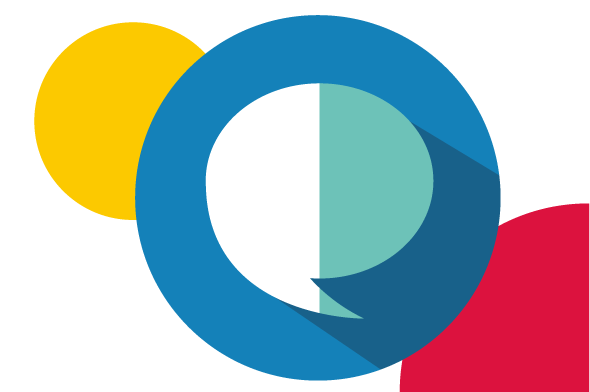 Gen Z committed to doing their part to improve environmental outlook, but don’t ask them to sacrifice international travel

Dublin, April 26th, 2022 – Extensive new research conducted by Amárach Research in partnership with Young Social Innovators (YSI), lays bare the impact of climate change concerns on the mental well-being of Generation Z (Gen Z). The nationally representative research of 1090 Irish teenagers found that climate change is the number one worry for the future for 78% of the Gen Z cohort.

The research was undertaken to understand the key issues Ireland’s young people are facing today, as well as their hopes and fears for the next 20 years, and coincides with the 20th anniversary of YSI in Ireland. YSI focuses on empowering Ireland’s young people to reimagine the world and the communities they live in, by collaborating with their peers to produce innovative ideas and projects that help propagate a fairer, more equal and sustainable world. Each year, some 15,000 young people across the country are supported to develop and submit hundreds of socially conscious projects to YSI, which in turn provides platforms and opportunities for young people to have their voices heard, bursaries to advance ideas to the next level and prestigious awards to recognise their endeavours. 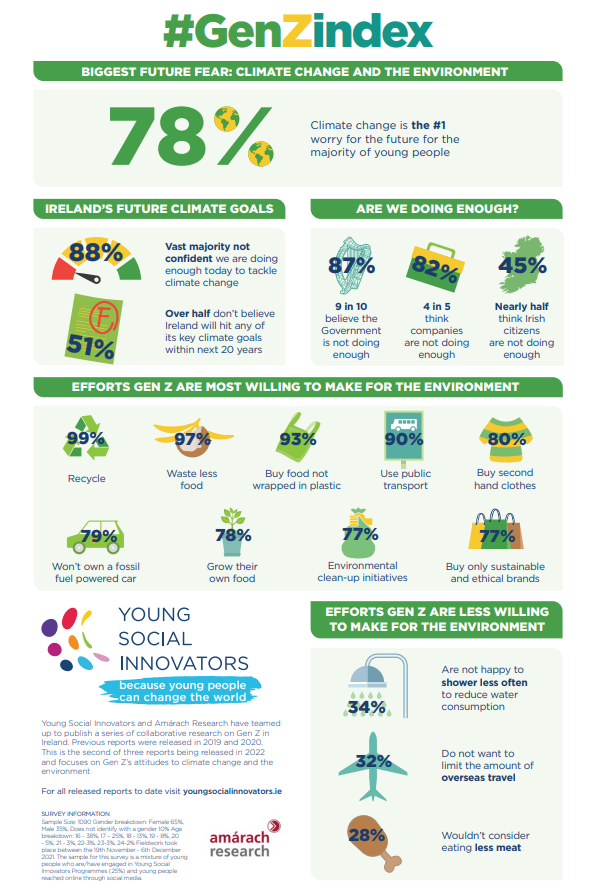 Of all the issues facing Ireland’s young people today, the Gen Z respondents ranked climate change fourth at 46%. However, when asked to think about their concerns for the future it rose to 78%, just one percentage point below the top future concern which was unaffordable cost of living. Within the overall context of the study which revealed extremely high levels of anxiety and depression within the Gen Z cohort (68% of respondents), it can be asserted that the concern over climate change is a significant contributor to this stark situation.

Drilling deeper into the topic of climate change, the study reported that over half (51%) believe that Ireland won’t hit its key climate goals within the next 20 years. The vast majority (88%) are not confident that we are doing enough today to tackle climate change, and nearly nine in 10 (87%) believe the government is not doing enough. Similarly, over four in five Gen Z respondents think companies are failing to play their part in addressing the issues, and 45% don’t believe citizens are doing enough either.

That 80-90% believe governments and businesses are dragging their feet is a telling statistic, one which politicians would do well to listen to. These, after all, are people either presently able to vote, or shortly to become, voters. Indeed, almost four in five of our young people want a greater say in politics and planning, and over one in three of these would consider becoming politically active. The message is clear – Gen Z will not stand idly by if their concerns are not addressed!

Despite their bleak climate outlook, the research revealed some positivity amongst the cohort, with 14% believing we will have cleaned up our oceans within 20 years, while 20% think we will have eradicated plastics, 18% believe the decline of our species will have halted, 18% think our depleted forests will be replenished, and overall, 13% feel we will have tackled global warming.

Nearly one-quarter (23%) of the Gen Z respondents identify as ‘climate activists’, while almost half (48%) do not. When asked about their own generations’ efforts to reduce carbon emissions, 94% claim they currently recycle, 76% are careful about food wastage, 70% use public transport, 53% buy secondhand clothes, and 42% buy food that doesn’t rely on plastic packaging. In terms of positively contributing to environmental sustainability, 82% are already, or planning to, engage in environmental clean-up initiatives, while 78% are open to growing their own food, 77% will buy only sustainable and ethical brands, and 79% are committed to not owning a fossil fuel powered car.

While the generation is very cognisant of the sacrifices and behaviour change required to improve our environmental outlook, the research suggests there are some sacrifices that might be a step too far for them. For example, 32% do not want to limit the amount of overseas travel they will do over the next 20 years, while 28% wouldn’t consider eating less meat, and 34% are not happy to shower less often in an effort to reduce water consumption.

Analysing the anxieties Gen Z have around the climate crisis as revealed in this research, Emeritus Professor John Sweeney of Irish Climate Analysis and Research Units (ICARUS) at Maynooth University, said,  “This extensive research confirms the huge anxieties Irish young people have concerning climate change. Unlike the older members of society, they have listened to, and got, the message from the scientific community that without radical action we are slipping into climate chaos, and it is they who will be footing the bill. That 80-90% believe governments and businesses are dragging their feet is a telling statistic, one which politicians would do well to listen to. These, after all, are people either presently able to vote, or shortly to become, voters. Indeed, almost four in five of our young people want a greater say in politics and planning, and over one in three of these would consider becoming politically active. The message is clear – Gen Z will not stand idly by if their concerns are not addressed!

“What emerges from this research is the overwhelming sense that society is failing these young people by its collective inability to act on the scale and speed necessary to provide them with a sustainable future. 40% see their future outside of Ireland, an indictment of our willingness to put present selfish concerns before their wellbeing. This report exemplifies the clarity of thinking which Irish young people exhibit. They are not burdened by short term economics and political pressures, but rather see decisive action on climate not as a cost, but as an investment in their future. We would do well to act on their concerns before it is too late.”

Commenting on the Gen Z research, Young Social Innovators Co-founder and CEO, Rachel Collier, said, “Climate change is a major factor feeding into young people’s fear and anxiety about the future and, while many believe they are playing their part, there is a lack of hope in the belief that Ireland will meet its climate obligations.

“From the research findings, it is highly concerning that Irish Gen Zs do not believe we are doing enough to take care of our planet and environment in which we live and that there is a vital need for action. The political system needs to pay attention to the priority young people are giving to this issue. They want to see more action from the government and from business. We have seen here and world over, how young people are not passive when it comes to climate change and activism. They want a say and should have a say in policies and practices which will help meet these obligations. We cannot address climate change without young people.

At YSI, we have been working in close collaboration with Ireland’s young people for the past 20 years, and, as evidenced by Gen Z’s participation in our programmes, we know how resilient, determined and action oriented they are. They are not a generation who are going to just sit by and watch the world implode, and it is so encouraging to see the survey reveal all of the important initiatives they are committing to as a way to improve their future outlook and that of our country and the world at large. 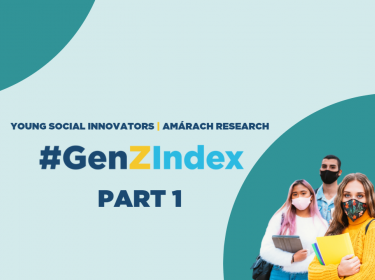 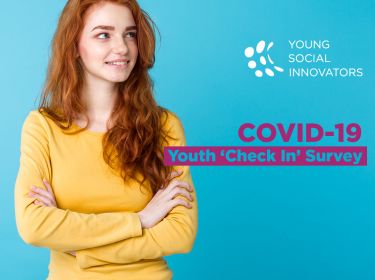 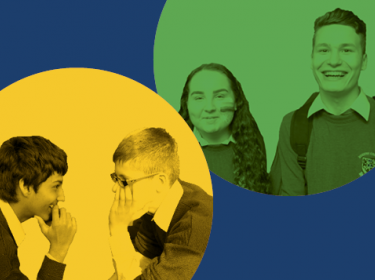 Stress, Smartphones and Social Media: What the Gen Z Index Tells Us About Teenage Wellbeing